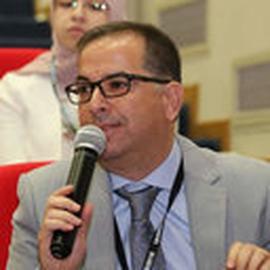 Ghaleb Faour holds a Ph.D. in Engineering Science obtained in 1995 from the University of Marseille III - France. He held a Researcher position from 1996 at the Lebanese National Center for Remote Sensing (CNRS) until he got promoted to become a Director of Research and Director of the National Center for Remote Sensing in 2014. His main research interests focus on the development of applied remote sensing technology in the sector of environmental monitoring and natural resources management. He is a Lecturer in Remote Sensing and Geographic Information System at the Lebanese University and the Higher School of Surveyors and Topographers in Lebanon. He had supervised and co-advised more than Ten Ph.D. students and Twenty Master Thesis. He conducted several specialized training courses and consultancies in GIS and Remote Sensing applied to urban planning, management of protected areas, agriculture, desertification, drought, climate change, and integrated water resources with the German International Cooperation (GIZ), UNDP, FAO and the Arab Institute of Forestry and Rangeland. He is the author of more than 50 articles published in peer-reviewed international journals as well as the co-author of “Atlas of Lebanon: Territory and Society” published in 2007 in French language and translated to Arabic in 2012, “Space Atlas of Lebanon” published in 2014 and “Atlas of Lebanon: New Challenges” published in 2016. He is the member of the National GIS Committee in 2002, the National Committee “Delimitation of the Maritime Exclusive Economic Zone” in 2009 and Chairman of the National Committee “Unification of Geospatial Coding” in 2015, created by the Prime Minister Office. Also, he is the member of the Governing Board of the Regional Centre for Space Science and Technology Education for Western Asia located in Jordan. He is a national reference and representative of Lebanon in the United Nations Institutes UN SPIDER and UN Outer Space since 2010 in the sector of space research and activities.